The CAP entails the European laws and regulations for the agriculture and horticulture sectors. Prescriptions for trade, food security, the use of plant protection products and medicines, labeling, environment, water, energy and more are fixed on EU level. These laws and regulations have influence on entrepreneurs and the regional economy. Furthermore, the CAP concerns the financing of the primary agricultural sector.

The current CAP is built on two pillars, both relevant for the Dutch provinces.

Pillar one is about EU financing directly targeted to farms and businesses, both individual as well as organised in coorporations and other collectives. The Dutch provinces and national government do not directly contribute to this type of funding.

Pillar two concerns the financing of measures for the development of rural areas. In this case both national, regional and local governments and businesses contribute. An average Dutch province receives about 70 million euro in CAP-fundung each year. That’s about 15% less than in the previous period (2007-2014), but still a substantial amount of money.

The provinces and CAP

The Dutch provinces are the government level that forms policy, creates preconditions and executes tasks in the areas of agricultural, regional economics, food supply chain and rural development. Provinces are committed to the interest of their citizens, consumers, employees, businesses and tourists.

Provinces have strong ideas about the future of agricultural policy and translate these into activities, regulations and (financial) instruments. They do this through continuous dialogues with the national government and all other stakeholders in rural areas. Provinces have, in the period from 2000 till now, by deploying own resources, among other cofinancing in pillar two of the CAP, invested hundreds of millions in the rural economy and quality of the environment. 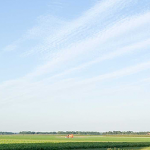